Munsiyari ( मुनस्यारी ) is the name of the sub-division headquarters, a conglomeration of revenue villages and it also refers to the entire region as Munsiyari Tehsil and Sub Division in the Pithoragarh District in the hill-state of Uttarakhand, India. It is a hill station and lies at the base of the great Himalayan mountain range, at an elevation of about 2,200 m (7,200 ft) and is a starting point of various treks into the interior of the range.
In local parlance, the name 'Munsiyari' refers to a 'place with snow'. Situated on the banks of Goriganga river, it is a fast-growing tourist destination, and mountaineers, glacier enthusiasts, high altitude trekkers and nature lovers commonly use it as their hub or base camp. Munsiyari also falls on the ancient salt route from Tibet and is at the entrance of the Johar Valley, which extends along the path of the Gori Ganga river to its source at the Milam Glacier. It is inhabited mainly by people of a few different caste groups including the Shauka tribe, dalits or Scheduled Castes and people categorized in other general castes comprising Kshatriya's, Pandits with a few Sikhs, Christians and Buddhists.
Munsiyari bazaar is a conglomeration of revenue villages and is not categorized as a town. The bazaar area comprises the villages of Malla Ghorpatta and Bunga, while Naya Basti, Sarmoli, Nana Sem, Jainti, Papdi villages form the periphery of the area popularly called Munsiyari. The main bazaar area faces east towards the Himalayan Panchachuli ranges.
The upper part of Munsiyari is called Malla Johar, which comprises 14 trans-humant alpine villages, that are seasonally occupied during the months of May to early November.

During a summer festival organized in Munsiyari market in 2013, a proposal for granting Munsiyari the status of Nagar Panchayat (lower level Municipality) was passed by the locals. Gram Panchayats attached to the Munsiyari market had also given their consent for this. On 28 February 2014, the Uttarakhand Cabinet decided to grant Nagar Panchayat status to the towns of Munsiyari, Chaukhutia and Naugaon. Shortly afterwards, the then Chief Minister Harish Rawat made an announcement confirming this move while on a visit to the town. The municipal area was to be created by incorporating 5 Gram Panchayats: Mallaghorpatta, Tallaghorpatta, Bunga, Sarmoli and Jainti. An official notification was issued on 7 October 2014, but due to major opposition by the Gram Sabhas, the Nagar Panchayat could not come into existence. In June 2015, several government officials visited the area and tried to initiate talks with local villagers. After all the talks failed, the notification that allowed the formation of Nagar Panchayat was revoked on 22 August 2016.

Munsiyari enjoys a temperate climate with the maximum reaching 30 degree C and the minimum at -12 degree C.

March to April: The entire Forest area turns red with rhododendron flowers, with snow capped Himalayas distinctly visible makes it an awesome site well worth visiting.
The Best months to visit Munsiyari are: March, April, May, October and November.

The main trekking route is to Milam Village and Glacier
Milam Glacier : Munsiyari is the point from where the trek to Milam glacier commences :

Gori Ganga (also Gori Gad) is a river in the Munsiari tehsil of the Pithoragarh District, part of the state of Uttarakhand in northern India. Its principal source is the Milam Glacier, just northeast of Nanda Devi along with the Glaciers of the Ralam River, and the Pyunshani and Uttari & Dakshini Balati Glaciers that lie on the western face of the Panchachuli Peaks.
The alpine trans-humant village of Milam is located one kilometer below the snout of the glacier. Here a left-bank stream called Gonka joins the Gori. The valley provides the approach route for access to peaks such as Nanda Devi East, Hardeol, Trishuli, Panchchuli and Nanda Kot.

The Khaliya Top is a meandering meadow surrounded by snowy peaks, offering an awe-inspiring view of the mystical land of Kumaun. The Khaliya Top is perched at an astonishing altitude of 3500 metres above sea level and located near Munsiyari in Pithoragarh district of Uttarakhand.
One can savour the panoramic views of the majestic Panchachuli, Rajrambha, Hardeol and Nanda Kot peaks from the Khaliya Top.

Tamri Kund or Thamri Taal is a small pond located in the forests of Munsiyari region of Uttarakhand. The Kund is revered by the locals to bless the region with rain in case there is insufficient rainfall.

The Panchchuli peaks are a group of five snow-capped Himalayan peaks lying at the end of the eastern Kumaon region, near Munsiyari, in Pithoragarh district of Uttarakhand state. The peaks have altitudes ranging from 6,334 metres (20,781 ft) to 6,904 metres (22,651 ft).

The Birthi Water Falls is located about 14 km from Tejam near Munsiyari in Pithoragarh district of Uttarakhand. This cascading fall surges from 400 feet above sea level and can also be reached from Kalamuni Pass. The Birthi Falls is about 35 km from Munsiyari and can be approached easily by a short trek.

Betulidhar is a colossal garden blossomed with scarlet coloured rhododendrons. It is one of the best places to visit during the winter season as this place offer exciting skiing opportunities. The ski months begins from December to February.

Established in 2000, Tribal Heritage Museum is a small cultural private museum located in Munsiyari town of Uttarakhand. The museum showcases the history, culture, traditions and lifestyle of Bhotia people who are ethno-linguistic group of people residing in the upper Himalayan valleys of the Kumaon and Garhwal divisions of Uttarakhand.

Nanda Devi temple dedicated to Goddess Nanda or Parvati is a Hindu sacred site where the faith of many devotees abides. This religious site can be reached by commencing a swift 3 km stimulating trek from Munsiyari town perched at 7,500 feet above sea level. It is one of the oldest temples in Uttarakhand.

There is no airport in the town of Munsiyari. The closest airport is the Naini Saini Airport, which is around 125 km from the town. However, even though it is the closest in distance, no commercial flights operate from the airport, but the government plans to begin commercial flights to better serve tourists visiting the Himalayan region. The next closest and functioning airport is the Pantnagar Airport at a distance of around 336 km. The Pantnagar Airport has regular flights to and from New Delhi via Air India Regional. The closest international airport to Munsiyari is the Indira Gandhi International Airport in New Delhi, at a distance of around 652 km. The Indira Gandhi International Airport is well connected to several cities in and out of India.

There are government, as well as, private buses to Munsiyari. The Uttarakhand Transport Corporation has buses to Munsiyari from New Delhi and Madkot. The journey from Delhi can be tiring as it is a 730 km long stretch that needs to be covered. Madkot is 134 km away from Munsiyari. Buses can be boarded at ISBT Anand Vihar in New Delhi. As the journey from Delhi to Munsiyari can be quite long and tedious, breaking the journey at various points along the way is recommended. Catching a bus from either Almora or Pithoragarh before finally reaching Munsiyari is a better option. 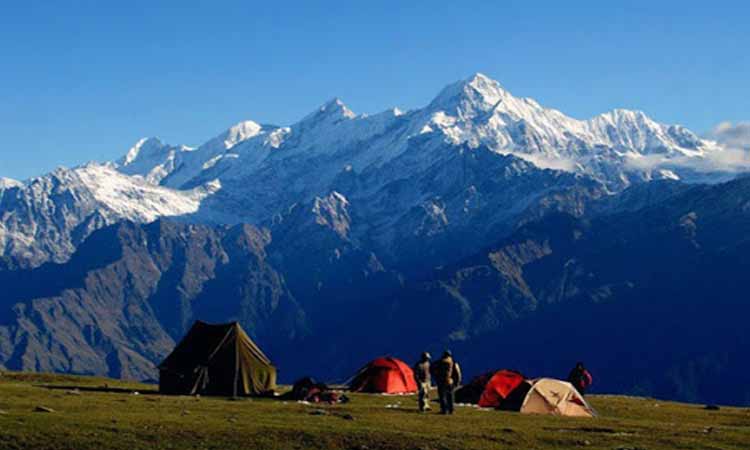 Mountains are always an attractive tourist destination. Apart from Himachal Pradesh and Kashmir, which are both very famous tourist destinations, Uttarakhand is a developing mountain state that has many hidden gems just being discovered. View is pretty beautiful.

Birthi Falls is a beautiful place surrounded by nature and snow clad mountains all around. The Birthi Falls is one of the beautiful nature's gifts located on the way to Munsiyari via Thal surrounded by tall green Hills and can be seen from the miles away. To reach near the falls a few minutes trekking is needed from the road. The fall is at a height of around 400 feet and is located in Munsiyari (on the way to munsyari). The place is a must go and certainly the place is a much more to see and visit. Water is ice cold in summer.