Rishikesh, a most tranquil place in northern Uttarakhand, surrounded by hills and bisected by the wide and sluggish Ganges, is often claimed as the `Yoga Capital of the World'. Back in the 1960s Rishikesh gained instant fame as the site where The Beatles came to stay with their guru, the Maharishi Mahesh Yogi. It is an excellent place to meditate and study yoga. Rishikesh is also a good starting Laxman Jhula point for treks to Himalayan pilgrimage centres such as Badrinath, Kedarnath , Gangotri, Yamnotri.It is rightly called the gateway to the Himalayan Shrines of Badrinath, Kedarnath, Gangotri and Yamunotri. 7 Story Temple Situated 24 km upstream from Haridwar, at the confluence of the Chandrabhaga and Ganga.
Rishikesh has long been a spiritual centre. It is said that the sage Raibhya Rishi did severe penance here and as a reward, God appeared to him in the form of Hrishikesh, hence the name. Rishikesh has numerous ashrams, some of which are internationally recognized as centers of philosophical studies, yoga and meditation. An international yoga week is organized here every year by Uttarakhand Tourism between 2nd and 7th of February. For the adventurous, there are opportunities for white water rafting on the Ganga. The climate here is continental type but its location in the foot hills gives it a pleasant weather throughout the year. One can visit Rishikesh any time of the year.

Rishikesh is unique city which has something to offer for everyone. Rishikesh is also known as River Rafting Capital of India. Rishikesh attracts thousands of adventure lovers every year. River Ganges from the Gangotri glacier to Ganga Sagar is one of the most holy rivers in India. Starting from Gangotri Glacier to Rishikesh it makes its way throughout the mountainous route. A number of white water rapids, creates wonderful opportunities for rafting which is rare in India. At Gangotri it is known as Bhagirathi but from Devprayag it is known as River Ganges when it merges with Alaknanda River. The River Ganges is like a part of Indian culture and civilization. On her way to Rishikesh, the Ganges River offers fun-filled river rapids. From grade 1 to grade 5 this area has all kind of rapids for perfect adventure. River rafting is a adventure for not only adults but it is also safe for children as well. To enjoy rafting you don't need to learn swimming. Rafting can be enjoyed by people of all age groups. High quality equipments and expert guide and instructors will ensure your complete safety. During the Rafting people can enjoy magnificent views of the Shiwalik hills and the Ganges. Brahmpuri, Shivpuri, Marine Drive, Byasi, Kaudiyala, Kirti Nagar, Devprayag And Rudraprayag are the places where you can start your rafting to Rishikesh.

Enjoy the natural and beautiful stay near Holy River Ganges in camp/Tent facility provided by us. To enhance your stay and make it wonderful, these tents have been decorated to provide you a homely stay. Each tent can accommodate two beds that are available in the Riverside/Beach Rafting Camp Tents like Lifemission Camp Shivpuri,Camp Valley View, Deluxe Camp Shivashish, Camp Roller Coaster Shivpuri, Marine Drive Beach Camp, Shivpuri Beach Camp, Brahmpuri Beach Camp, Jungle Camp, Luxury Jungle Camp, Devprayag Camp and School Summer Camp. Nutritious food is served, that is cooked in tent kitchen and served to you steaming hot. As tents are near Ganges no electricity is available in these tents. Though, lanterns will be provide. For all those people who love fun and adventure, it is an opportunity they would scarcely like to miss

Bungee jumping - Bungy Jumping is an activity that involves jumping from a tall structure while connected to a large elastic cord. The tall structure is usually a fixed object, such as a building, bridge or crane; but it is also possible to jump from a movable object, such as a hot-air-balloon or helicopter, that has the ability to hover above the ground. The thrill comes from the free-falling and the rebound. When the person jumps, the cord stretches and the jumper flies upwards again as the cord recoils, and continues to oscillate up and down until all the energy is dissipated.

Rishikesh is also known as Himalayan Town of Uttarakhand as it is sheltered by beautiful Himalayan valleys. The intriguing uneven rocks of the Shivalik Himalayan Cliffs entice climbers to reach to the top. Travelers from all around the world enjoy rock climbing over these thrilling cliffs and get mesmerized by the scenic views, while stepping up on the edges of these magnificent rocks. The cliffs present exciting challenges in front of adventurers who come from far off distances to get a thrill of rock climbing.
Climbing over the Shivalik Himalayan Cliffs is more like a practicing session to them. People of all ages are seen hiking up and making the best of their stay. Rock climbing is not an easy adventure and needs diligence. Travelers who are new to mountaineering must heed the introductory sessions given by expert climbers and instructors. These sessions will help them to understand the technicalities and obstacles of this adventure. Moreover, the climbers must gear up with essential equipments that are needed to climb over the cliffs. Following are some significant points that a climber must keep in mind before hiking.

The adventure of descending down a rock, relying 100% on the equipment, is called rappelling. Like rock climbing, rappelling in Rishikesh is also great fun. Geared with the right equipment, you can double up the joy of this adventure. Rappeling down a cliff can be done in a variety of ways. Even when you have with you standard climbing gear, you should know how it use the gear for a safe rappel down the cliff.

Rishikesh, a small town in Uttaranchal, is better known as the Yoga capital of India. The land of Rishikesh is supposed to be perfect for performing Yoga and Meditation. According to legends, Brahma, the creator of universe, found the land and aura of Rishikesh perfect for performing Yagna. It is said that he prayed here for overall peace of whole universe. Later lord Vishnu and Shiva also performed penances here. Gods found this place perfect for prayers and meditation.

To be found in the heart of town, is the most famous bathing ghat, where most pilgrims take a holy dip earlier than they visit the various temples. This is done generally in the early mornings, with the pilgrims offering prayers and milk at the Ghat and feeding the fish in the water. An amazing sight here is the evening arati, a ceremony accompanied by lights, drums and chanting, with the entire ghat lit with lamps glowing from a distance.

Near the Ghat, is the temple known as Bharat Mandir said to be the oldest temple here built by the Adi Shankaracharya. This 9th century temple has the deity of Lord Vishnu carved out of a single black stone popular as Saligram, and is placed in the inner chambers of the temple. The original temple was said to have been destroyed in 1398 AD. If you are lucky, catch the spring festival also called Basant Panchami celebrated here.

Close to the Triveni Ghat is the very old place of Rishikund where the Saint Kubz is said to have been blessed by the Goddess Yamuna, who filled the pond with her water. The temple of Raghunath dedicated to Lord Rama and his wife Sita is sited here.
2 kilometers from Swarg Ashram, is the well-known Lakshman Jhula a suspension bridge 450 feet long and built in 1939. Named after Lord Ram's younger brother Lakshman, it has temples dotting its either side, including the famed Lakshman Temple at Tapovan. One more noteworthy ashram is the 13 storeyed Kailashananda Ashram, with each storey being dedicated to a different deity.

is situated 3Km north of Rishikesh. It's a very popular place amongst people coming for religious purposes because it has very known Ashrams. Most known is Geeta Bhavan & Swarg Ashram and these temples are very important in Hindu society and you will see much more commotion here then in Lakshmanjhula.
To be found at a distance of 12 km from Rishikesh, this temple stands at a height of 926m on top of a hill across the river Ganga. It derives its name from Lord Shiva. According to mythological belief; the cosmic churning of the oceans (Sagar Manthan) for the potion of immortality (amrit) by the Gods and the Demons; produced a venomous liquid, which was consumed by Lord Shiva at this place. As a result, his throat became blue in color, which in Hindi literally means 'Neelkanth' (blue throat). The place is a favorite among the religious tourists.

There is a cluster of ashrams on the eastern bank of the Ganges, and the place is popularly known as 'Swarga Ashram'. Most of these ashrams provide courses on yoga and spiritual studies, and are well-known among the tourists. Some ancient temples with beautifully carved statues are also located in the place. There are a few vegetarian food joints that serve various Ayurvedic food and refreshments. A few shops are also found, that sell various trinkets and souvenirs in the form of religious tapes, books, beads, beaded garlands, shells and clothes.

Near the Lakshaman Jhula, is the newly constructed building of Gita Bhavan. It runs a free Ayurvedic dispensary and also has a branch of the Gita Press, Gorakhpur. There are more than a hundred rooms for visitors and this edifice houses various striking paintings and statues of ancient mythological characters. The stories of the ancient epics- the Ramayana and the Mahabharata are beautifully illustrated on its walls. The place is also popular among the tourists.

AirPort Near By Rishikesh is in close proximity of Dehradun's Jolly Grant Airport (about 15 km) - a small, quiet and recently renovated airport handling many flights from Delhi. The runway is being extended and will possibly then handle flights from other metros as of now there are flights only from Delhi (The capital of India)

Rishikesh railway station A quiet branch line connects Rishikesh to Haridwar, but there are only about three slow trains daily. It's best to take the train to Haridwar as Haridwar is serviced by many trains from to Delhi, Varanasi, Rajasthan, Amritsar, etc. and continue by bus (45 min), by taxi (30 mins or by shared auto-rickshaw (40 min). Travelling by train comes recommended because they often run empty and the fares are low & run right-time especially in peak seasons or "Melas" (Fares) when bus routes are diverted in Haridwar & share rickshaws try to make a killing. You can take "Vikrams" towards Lakshman Jhula from Rishikesh station.
You will have to cross Ram Jhula to reach Swarg Ashram (On the other side of river Ganges). From Delhi there are many trains to Haridwar, some of the best are :- Shatabadi Express, Jan Shatabdi, AC Special Express, Mussoorie Express. to buy a ticket.

Delhi airport to Rishikesh by car is a good option for a hassle free traveling specially for foreign tourists who are traveling to India for the first time. It's a 6 to 7 hours journey.
Note: Try and leave Delhi between 4-5 a.m as driving time increases beyond 6 hours due to morning congestion in towns like Modinagar and Roorkee. 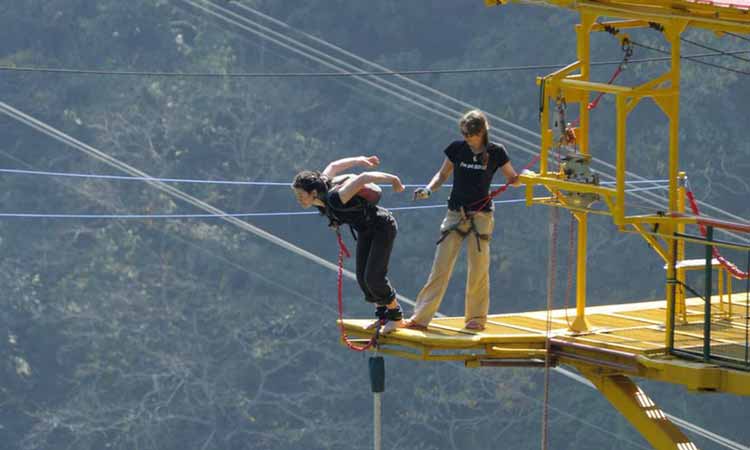 Rishikesh I very awsome place in Uttarakhand.i went their with my friends.We have done their tracking, camping.and their is waterfall neer jharna also it's around 5 km from main road.And we went ram jhula and laxman jhula.

Rishikesh has a lot to offer to people right from aged to young ones. There are many temples and many tourist spots. The climate there is so cool and peaceful . There are many fun things which you can enjoy like river rafting, Paragliding, bungee jumping and a lot more . Many old temples to visit . Also the market is good but you should be good at bargaining . They charge extra to new people . I visited it last year and had a great experience.